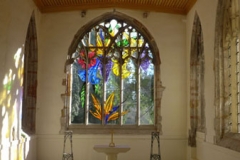 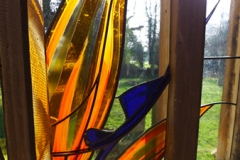 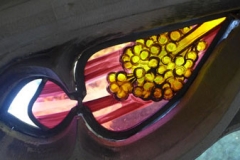 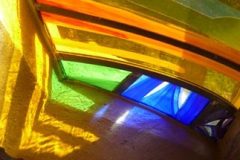 A new stained glass window has been installed at the east end of the church. The modern, bold design has been created by designer Helen Whittaker, at Barley Studio in York. It is called the ‘Paradise Window’, reflecting St Brandon’s own journey to an exotic island, recorded in a book from around 900 AD.

Even for skilled craftspeople, this has been a challenging commission.

“It’s the sheer scale of these pieces of glass because each piece of glass has been blown by mouth into a bubble which is then opened up into a sheet. I’ve been working with stained glass for over forty years and I’ve never seen a creation quite like this one.”

“Despite the church’s Saxon origins and Mediaeval structure, the restoration has given the building a light, bright and modern feel.
The same can be said of the new window, which is bold and colourful.
We did not want a window to be a memorial to the fire, or to our past, but to look forward. The building is now both ancient and modern and we wanted the window to reflect this.”

The Rev Rick Simpson, Rector of St Brandon’s Church at the time the window was dedicated.

The east window is the final piece in the restoration jigsaw. The window was dedicated by the new Bishop of Durham at a service on 18th May 2014.